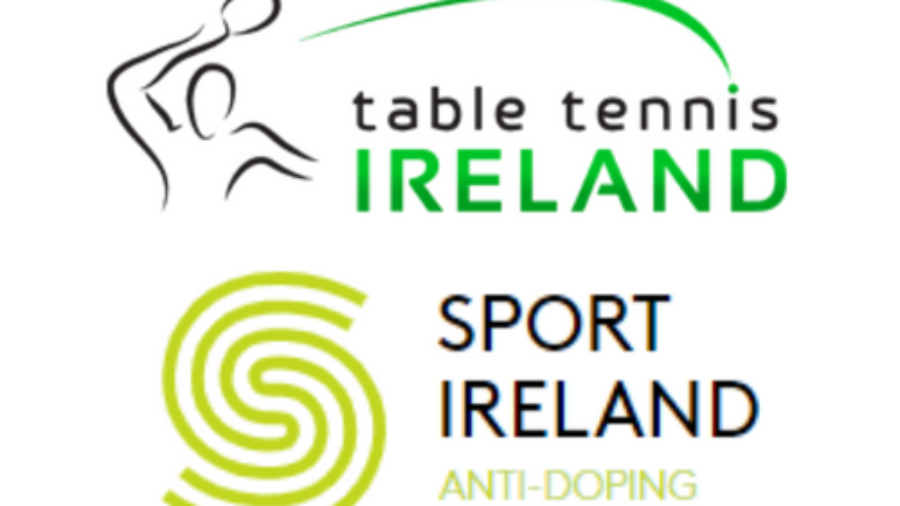 Anti-Doping forms a very important part of ensuring our sport is clean and fair, we can’t stress the importance of making sure that our Table Tennis Community are aware of Anti-Doping processes and procedures.

This webinar will be a very informative engaging session which will be useful to all of our members, including players, coaches, parents, NPC’s and clubs. This masterclass will provide an overview of what happens during a test for anti-doping, an overview of what substances are banned as of 2022 and some other useful information to know on anti-doping, such as therapeutic use exemption – in some instances an athlete may be given the authorization to use a prohibited substance or method.

We encourage all our athletes, parents, coaches, athlete support staff and all other interested members to sign up for the very important Anti-Doping Educational Webinars run by Sport Ireland Anti-Doping Unit.

To register for this webinar please email [email protected] and zoom details will be sent out to you prior to the session. 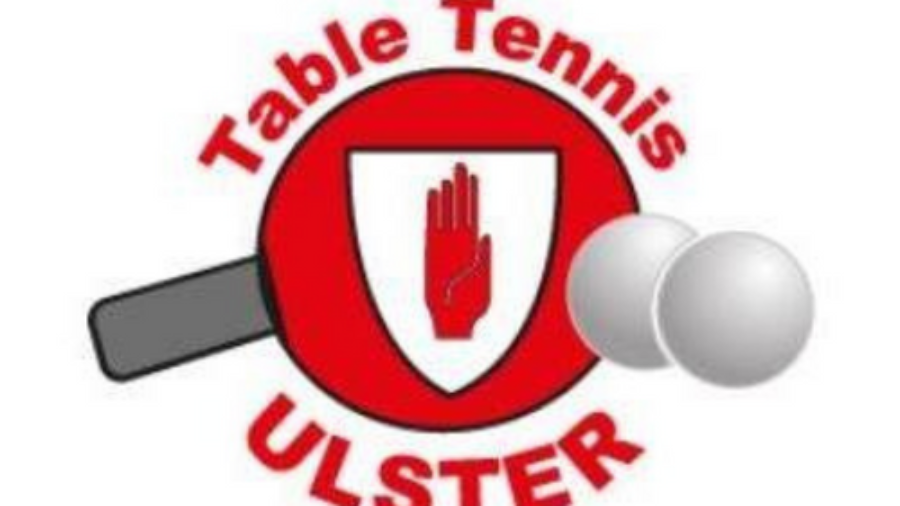 Please see below the draws for the events. Check-in from 8.30am and play starts 9am sharp Saturday and Sunday!

Please note there have been some time changes.

(Times maybe subject to change, keep an eye out on TTI Social Medias/Website)

CHECK IN will be 30 minutes before scheduled start of your first event.

Make sure to check out our YouTube channel for some live streams that will be taking place throughout the weekend:

The World Anti-Doping Agency (WADA) 2022 List of Prohibitive Substances has been updated since the 1st of January 2022. Sport Ireland launched the Anti-Doping Digital Wallet Card for 2022. It is essential that all players and support personnel whether coaches, physicians, or doctors attached to clubs or teams, consult this educational card, as well as the closely related Summary of Major Modifications and Explanatory Notes.

Enjoy the event and we would like to wish to wish all the players, coaches, officials and volunteers the very best of luck at the weekend! 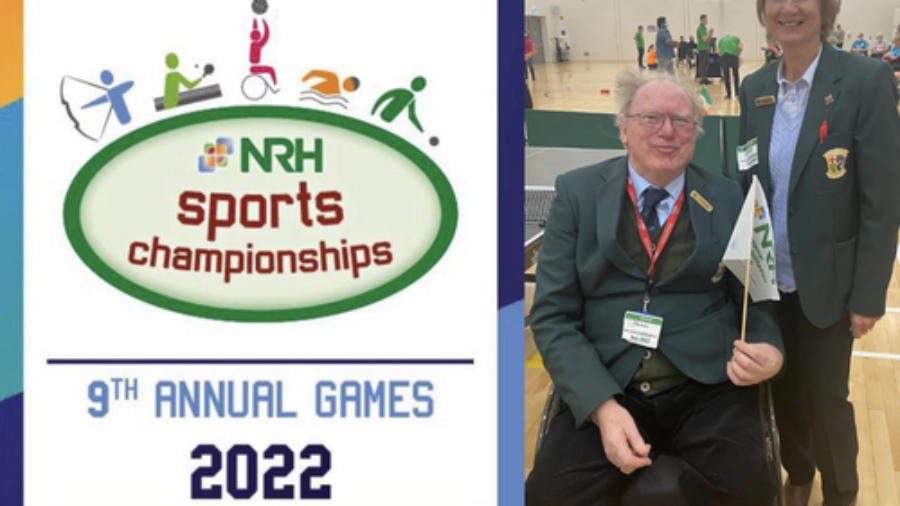 From the 7th-10th of November, the National Rehabilition Hospital hosted their 9th Annual Sports Champs. Which saw the inpatients compete amongst a wide variety of sports throughout the week. There were many sporting events on offer, such as swimming, archery, rock climbing and lots more. Table Tennis is amongst one of the many great sports on offer.

Over the past year we have collaborated with the NRH delivering training programmes to the patients within the NRH. These have been a fantastic success, and we look forward to continuing our collaboration.

The table tennis event at the NRH was amazing. There was approximately 50+ registered patients for table tennis from all 4 rehabilitation programmes (NRH Spinal Programme, NRH Brain Injury Programme, NRH Limb Absence Programme and NRH Paediatric Programme). Our umpires John Dempsey and Terri McKeon assisted with volunteering and umpiring at the event and provided plenty of tips and encouragement to the table tennis players. The standard of the playing at the table tennis event was superb, the sessions proving useful. Congratulations and well done to all the players on a great competition, we hope to see some of you take part in some of our events!

We would like to thank the NRH Staff for inviting us to be a part of this fabulous event, it is great invite for the patients and volunteers to be involved in. Well done to all the patients, staff, volunteers and everyone for a wonderful week of sport. We look forward to the 10th Annual Sports Champs next year! 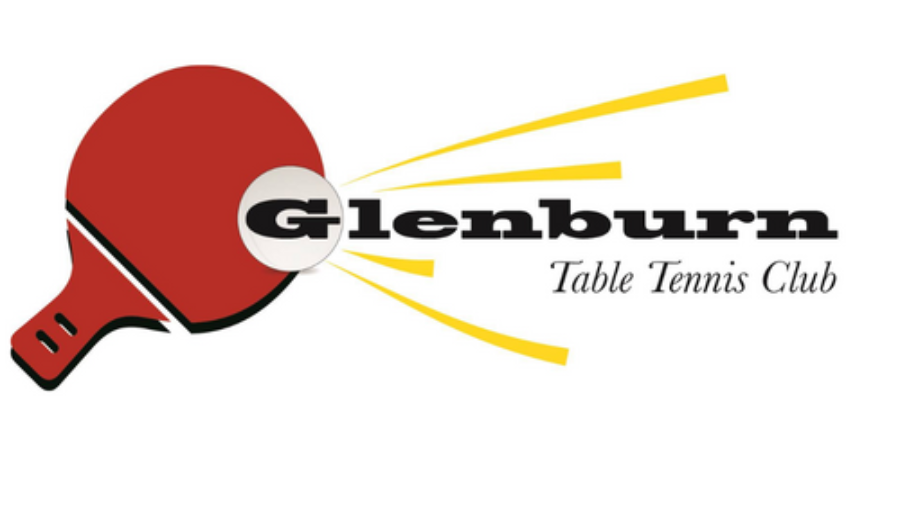 Almost 50 players entered the event this year, with by far the largest number in the 50s. All the events were very closely contested, and even in the absence of a couple of likely seeds the standard of play was impressive.

The “blue riband” event, the 40s, saw the third seed Phil Wallace in the “group of death” – there always seems to be one! After losing 3-0 to Pat McCloughan he qualified for the knockout stage with a win over Paul Gallagher (both these players had beaten him in the previous tournament and briefly the organisers weren’t “fast Phil’s” favourite people!) He met perennial winner Daryl in the last 8, beat him 11-6 in the fifth, and then disposed of Rod McKirgan 3-1in the semi. In the bottom half Eduardo came through with 3-0 wins over Pat and Tibor. The final was nip and tuck, a classic, Eduardo’s Penhold grip and heavy spin were a complete contrast to Phil’s “see ball hit ball” style, though to be fair Phil interspersed his power shots with some deft touches. It was difficult to pick a winner as the tide ebbed and flowed, but eventually Phil was a worthy champion -5 5 -5 8 8.

The 50s had its share of titanic struggles and with an entry of 25 it looked as if we could be playing until Sunday morning – not recommended for a church hall! The quarter final match between Mark McAlister and Paul Gallagher was only 4 games, but there was never more than 2 points between them at the end of each game, and the third was 20-18, Mark eventually emerging victorious, only to lose to Tibor 3-0 in the semi. Tibor had beaten Philip Shaw 3-2 in a bruising encounter and said afterwards “How does he slap those balls from everywhere! It’s just not possible.” Pat made his way to the final with 3-0 victories over Fergal O’Hagan and Sean McAnaney. In a pulsating final Tibor won 3-2, recovering from a 2-1 deficit.

The 60s began at 9.30am, Norman started in his usual fashion with two 5-setters (lost deuce in 5th to Sean and beat Jeremy Lappin 9 in 5th) but had no answer in the semi to PhilipShaw 0-3. Dave Pender beat Sean 3-1 in the semi and then had a tremendous hard-fought win over Philip in 4 sets. His smile was as wide as the Lagan as he said he didn’t care about the prizemoney, this was only the second Masters event he had ever won (he still accepted the winner’s envelope!).

Brian Finn always looked like the 70s winner, dropping only 2 games in 5 controlled matches. In contrast Norman staggered through with 2 more 5-setters against Ken Peare and Albert Coulter, but after losing the first in the final Brian had too much consistency. At 12-12 in the 4th Brian hit a sumptuous backhand winner of which Norman would have been proud and closed out the match 3-1, emerging an emphatic winner. Brian has now won all three 70s events this season, a tremendous record.

The ladies’ event had 9 participants and played off in 2 groups. In group A Ger had an incredible struggle with Sharon Gibbons, dropping the first two games, winning the third 19-17, the fourth 13-11, and the fifth 11-5. Sharon in turn dropped the first and third to Renata Gadula before coming through 11-9 in the fifth. Annmarie won all her group matches 3-0, Paula O’Neill was made to fight hard for second place, being taken to 5 by Galway’s Teresa Egan (11-9) and by Ikuko Mototani (11-6). In the crossover semi-finals, Ger beat Paula 3-0, while Annmarie beat Sharon 3-1. Ger had an unusually comfortable win over Annmarie in the final 3-0.

The top table was manned very efficiently all day by Glenburn’s Herbie Ross and Neil Magrath, though it was noted that Neil skived off briefly with the pathetic excuse of going for his Covid booster.

As a club we appreciated the support given by the players and the fact that we were able to give Dave and Sharon Gibbons a break from their normal duties and concentrate on playing. 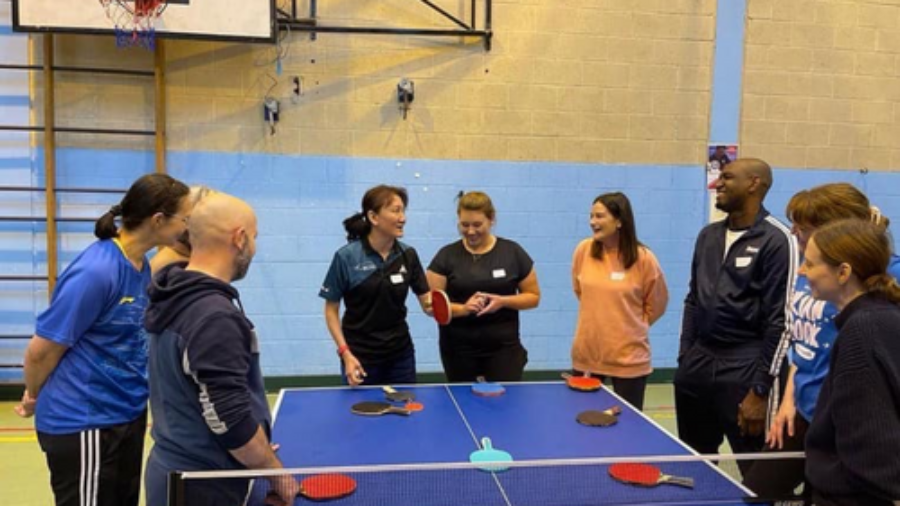 We are delighted to announce that a Level 1 Coaching Course is taking place in Leinster in January 2023. Successful candidates will receive a coaching certificate and will be included on the TTI Coaching database. Candidates should be aged 16 years and over.

The cost for the course will be €100 for TTI Members or €120 for non-affiliated members.

Please contact the office ([email protected]) for any further details that you may require about the course. Places are limited and are filling up fast, register now to secure a place. 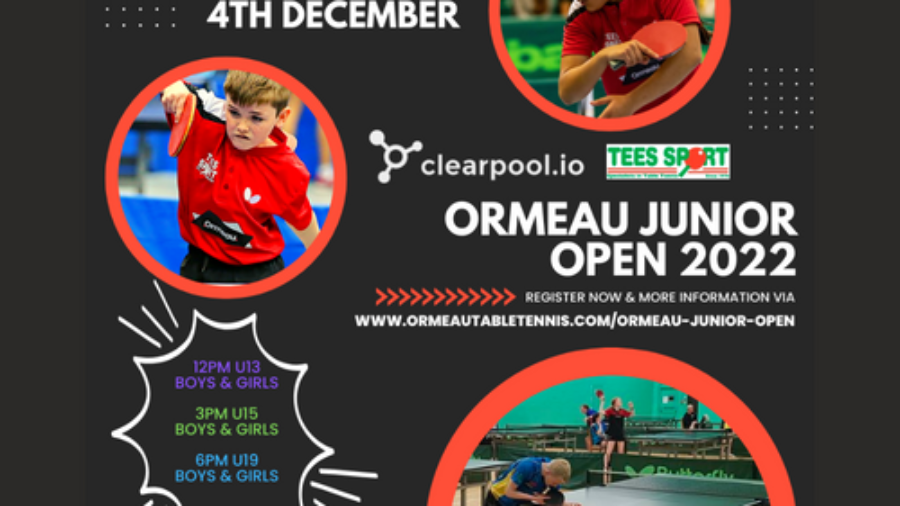 Ormeau TTC are hosting their annual Junior Open Tournament in December. This is a perfect junior tournament for players of all ages and abilities both boys and girls.

Ormeau would like to thank Sponsors Clearpool.io for all their support towards the Ormeau Junior Open. 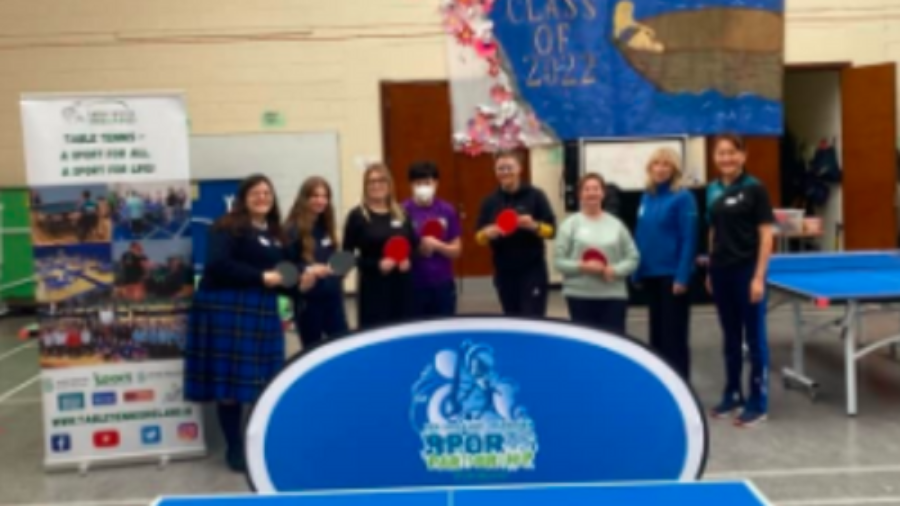 A Young Leaders Award programme was completed at St Raphaelas Girls Secondary School Dun Laoghaire in June, in which 16 girls participated in a 6-week training programme. This course was provided to students who were doing their PE Certificate. The course not only provided students with basic table tennis skills, but most importantly provided training in female empowerment. The young girls took part in a Sports Psychology (Mental Toughness) session, learnt managerial skills, organising a fun session with a group of 24 girls from a local Primary School. As a follow up to the Programme, a Teacher’s Award course was delivered on 12th October when 8 new female coaches were qualified and gave very positive feedback. 3 coaches expressed interest in taking further coach education by joining a Level One Coaching Course.

To ensure the sustainability of the work done at St. Raphaelas, TTI has agreed to supply a coach on a weekly basis to help establish an after-school TT Club at the school. Plans have been agreed for club sessions to start in January 2023.

Following the success of this collaborative project, Dun Laoghaire Rathdown LSP and TT Ireland will run 2 more similar projects in the region. I would like to take this opportunity to thank DLR partnership, especially Shane and Kevina for all their support. Without their help it would not be possible for us to deliver the project so smoothly. 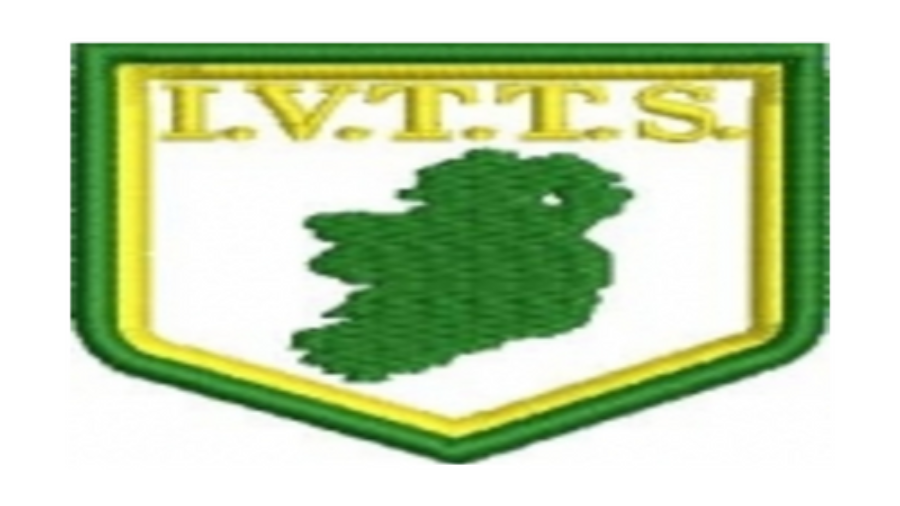 A very exciting IVTTS event took place at the weekend – The Glenburn Open.

Well done to all the players for competing and making the event a very entertaining one. A big thank you to the volunteers for helping run the event. A special mention to the Glenburn Club for running the event and making it a hugely successful event. 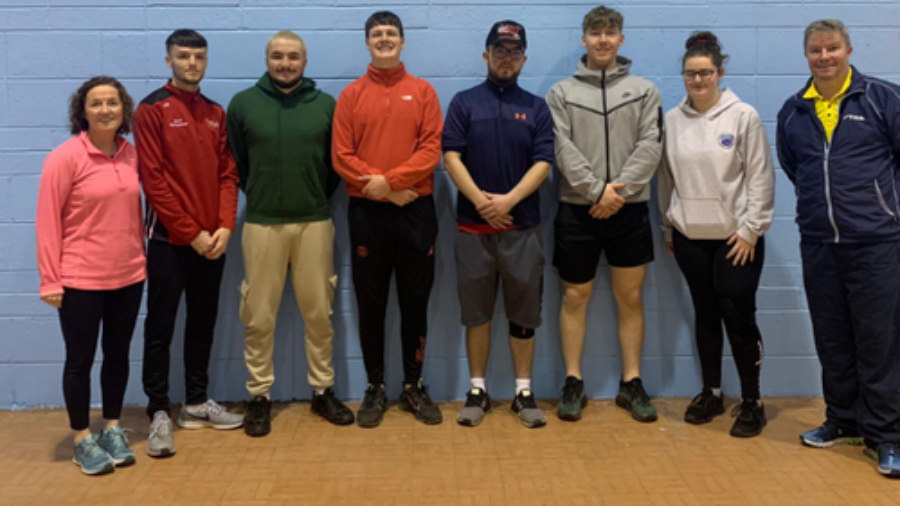 Many students and staff took part throughout the day and gave table tennis a go. Lots of fun and engagement from all participants at all sessions, well done to all! The participants were thoroughly engaged and got plenty of tips and tricks from Niall.

There is plenty of interest within the community to continue and grow the sport within Athlone, and to take part in some local competitions.

A big thank you to Niall for coaching and to Sinead from TUS Athlone for arranging the great open day. 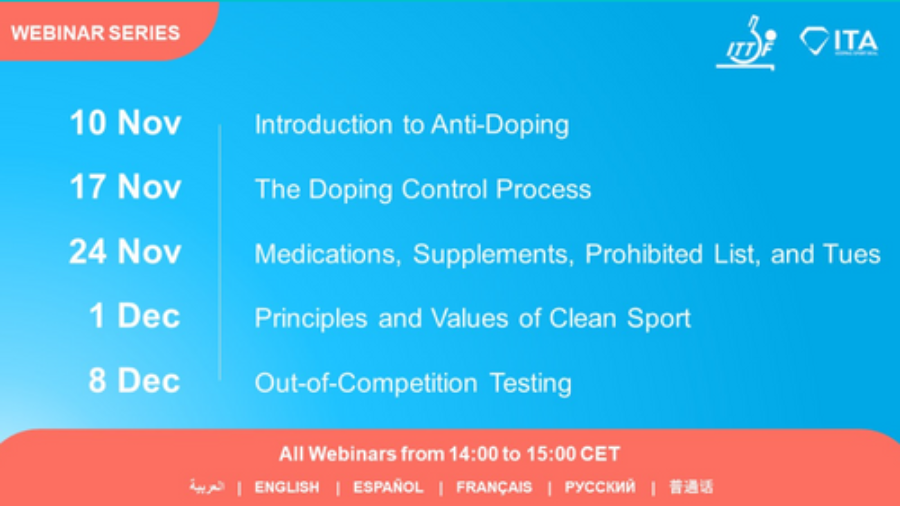 The International Testing Agency (ITA) is hosting a series of webinars, inviting the entire table tennis family. The aim crystal clear: to advance the cause of keeping sport clean.

Players, coaches and all involved are strongly advised to attend the webinars; conducted in English, simultaneous translation being available in Arabic, Chinese, French, Russian and Spanish.

It is important that participants sign up for each session using the links below as they are stand-alone webinars.

All five sessions commence at 13.00 and last for one hour.