Colum Slevin, Ireland’s greatest ever player, recently agreed to provide an interview for our website. This was conducted by Anna Kelly, former player, Irish Senior Selector and NPC. The interview is full of revealing insights into Colum’s career and includes his thoughts on how best to develop young players.

Colum was undoubtedly the best Irish player over a period of 20+ years with many successes in the international arena but, his playing commitments in Germany  meant that he ‘only’ won the National Men’s Singles title 8 times !

It is a ‘must read’ for all in Irish table tennis. 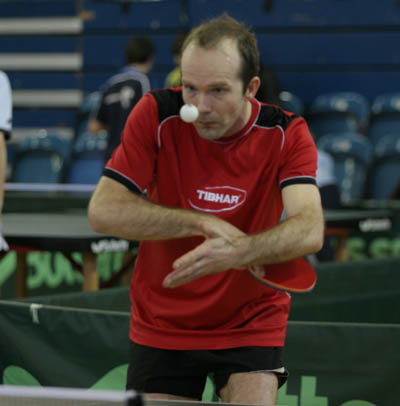 Q: What age were you when you started playing table tennis?

I was 8 and started in Glenalbyn Sports Club in Stillorgan, Dublin

Q: What age were you when you first won the National Senior Champs?

Q: At what age did you get your first Senior International ‘Cap’?

Same age – 13, I was selected to play a European League Match against Bulgaria when I was 12 but we missed the flight and arrived late for the match.

I beat Erik Lindh of Sweden in the 1st round of the French Open in 1988. At the time he was No 2 in Europe and No 3 in the World. He was seeded No 1 in the tournament.

My first coach was Tommy Rowsome who was the biggest influence on my career. It was only much later that I realised what a genius he was. His biggest talent was to create a fun environment for kids to thrive.

Later I met Stellan Bengtsson of Sweden, a former World Champion who was my coach when I played in Berlin. Unfortunately, it was too late for me to benefit as a player, but I learnt everything from him about being a coach.

He is a great guy who was so generous and kind with his knowledge.

Q: Did you mind playing defenders?

No – I had some very good wins over defenders. For four years I practised every day in Lubeck against Roland Krmaschek who was a Czech International defender. My best win against a defender was against the late great Igor Solopov of Russia/Estonia in the World Championships in Sweden in 1993. He was ranked 50th in the World at the time.

Q: How many European Championships did you play in?

Q: How many World Championships did you play in?

FIRST TIME YOU PLAYED FOR IRELAND WHO DID YOU PLAY AGAINST?

Ireland played Poland in Dublin in the European League in 1977.  I played Andrzej Grubba and Lescek Kucharski two of Europe’s top players at the time.

GREATEST MATCH YOU EVER PLAYED

I played Mikael Appelgren of Sweden in the World Championship singles in Dortmund in 1989. I led 2:0 but then lost 3:2. He had just led Sweden to an historic 5-0 win over China in the final of the team event.

INTERESTS WHEN NOT PLAYING TABLE TENNIS

When living in Germany I played a lot of Tennis and Squash in the off season. Now I’m more in to hiking.  Reading and Music were and still are big hobbies. I used to stay with Stellan Bengtsson when training in Sweden and he had a massive music collection, 1000’s of records and CD’s. I learnt nearly as much about music from him as table tennis.

Q: Did you have a successful Cadet/Junior Career? What memories stand out?

I was good as a Cadet but not as good as a Junior. I reached the quarter finals of the Cadets at the European Youth Championships twice. I was seeded 3 in my final year but lost against an unseeded Jan Ove Waldner. It was the only time I ever played against him. My best result as a Junior was winning against Juergen Rebel from Germany who was seeded number 2.

The best memories are actually the fun I had with Brian Orr and Aidan Walsh, my teammates for most of my junior career. Aidan passed away tragically 2 years ago.

Did you have a killer shot?

No but my backhand was my best shot and I was pretty good tactically.

WHAT DO THINK OF LONG PIMPLES?

I don’t think under 14 players should be allowed to play with them. They should try to develop their overall game first. They have a big advantage against very young players who don’t have the strength or technique to play against them, but they often become disillusioned at Junior level when they are no longer as successful.

WHAT WAS THE MOST IMPORTANT MATCH YOU EVER PLAYED?

I played in the semi-final of the European Cup for Lubeck against Grenzau.  The match was evenly balanced and I had to play the decider against Oliver Alke who was one of the best German players at that time and better than me. I won the match and we later went on to win the European Cup.

Who do you think is the NEXT BIG THING?

I really like Truls Moregard of Sweden. He plays a bit different from the rest.

WHAT DO YOU THINK OF THE AMOUNT OF OLDER PLAYERS STILL PLAYING INTERNATIONAL TABLE TENNIS?

I think it’s great. When I was playing it was a general belief that you were over the hill at 30. That overall belief changed when Sweden beat China in the World Championship final in Kuala Lumpar in 2000. Persson, Karlsson and Waldner were all well into their 30’s. It was similar to when Roger Bannister broke the 4 minute mile. The belief at the time was that it was impossible. A number of runners broke 4 minutes a short time after. As in tennis the better physical training and dietary improvements are helping players to play even longer. Samsonov is still playing incredible as is Timo Boll at 38.

PLASTIC BALL – WHAT DO YOU THINK OF IT?

It was terrible in the beginning as the quality of the ball was very bad. The balls they are now using at international level are much better quality than the old celluloid balls but it’s only one company who make them. Most companies are still struggling to produce a ball of the same quality as their previous celluloid ball. More on this topic later.

WHAT QUESTION WOULD YOU ASK YOURSELF?

What advice would you give your younger table tennis playing self?

Don’t take it so seriously and enjoy every moment. Of course, I didn’t realise how great it was playing table tennis for a living until it was over haha!

DO YOU HAVE ANY REGRETS?

There are many things I would do differently if I had the knowledge that I have now but at the time I didn’t know any better, so the answer is no I don’t.

WHAT WAS YOUR BEST SERVE?

I work as a physiotherapist specialising in a treatment called Cranio Sacral Therapy.

Were you good under pressure?

I suppose the answer to that is sometimes. If I managed to make it through to a final then I usually won but it took me a long time to get going so I was generally better in tournaments than league matches.

WORDS OF WISDOM FOR YOUNG PLAYERS

If you don’t enjoy practising then just play for fun because if you want to play at a high level then you have to spend a long, long time in the training hall. It’s better to hang out with your friends if you’re not enjoying practising.

WHICH PLAYER DO YOU THINK HAS THE X FACTOR?

Jan Ove Waldner of Sweden – I enjoyed watching him play as he made a very complicated game look so easy.

YOUR THOUGHTS ON THE MODERN GAME

The development over the last years has been interesting to observe. I’m not sure if any other sport has gone through as many changes. The players have managed to adapt as they always do. The game is more open and the rallies are definitely longer, despite the fact that it is now faster than ever.

I already mentioned the plastic ball and it seems to be the big factor in how the game has developed of late. It is faster and has less spin than the celluloid ball. It is essential now for players to be strong with forehand and backhand. The serve is less effective making it easier to attack on return of serve. If I have one complaint it is that there is less variety than before.

The Chinese are still years ahead of the rest although they have looked a little more vulnerable with the plastic ball. I think it’s because it is easier to block and counterspin their powerful shots with the new ball (provided the quality is good) and they have had more injuries as the ball is heavier.  They are still technically far superior though. The Europeans can match them on the backhand side but their forehand and footwork is so much better. To play a forehand like the Chinese you have to have amazing footwork as it’s a much longer stroke. I feel that the younger more talented Europeans need to be playing a similar type of forehand to have any chance in the future. It would make the game a lot more appealing if there were more players able to challenge the Chinese.

ZAGREB WAS I BELIEVE WHERE YOUR INTERNATIONAL CAREER ALL STARTED.

Yes, my 1st cap for Ireland was in 1975 in Zagreb at the European Youth Championships. I was 10 years old and it as all very exciting. I can remember nearly every detail. So, it obviously had a huge impact. I didn’t win any matches but it still motivated me to train even more when I got home.