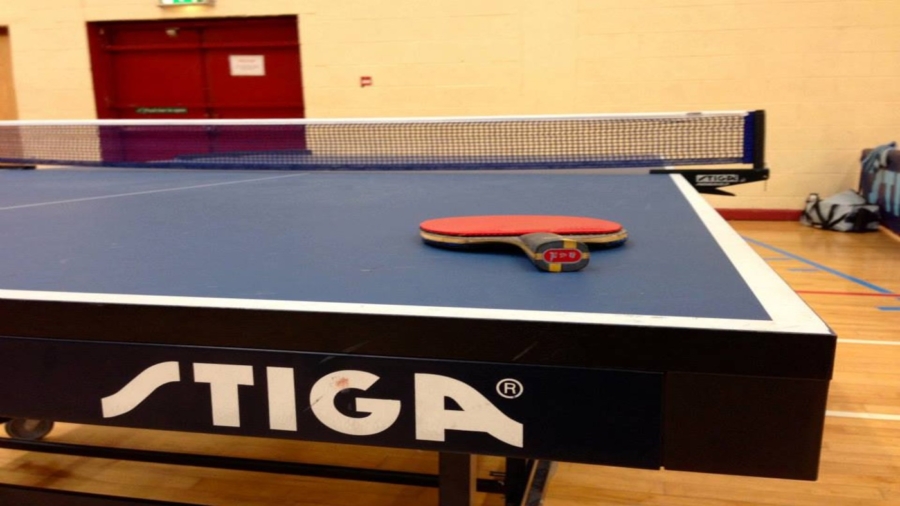 Last weekend witnessed an exciting start to the Junior domestic season with the STIGA Irish Junior Classification held in DCU, Dublin. Entries were up 17% on 2010 and clubs from all over the country were represented. With players aged from 8-17, the focus of the fans as always was on the elite players – however with the group into group qualification system and the provision of Plate events, there were lots of matches for all players, including many who were playing their first National event. Full results from every match played are available here –

Many thanks to our excellent volunteers who have driven the roll-out of Tournament Software which was piloted in this event.

As is almost traditional, Ashley Givan took 1st place in the Under 17 Girls event and she did so in style without dropping a set in the entire event. She defeated international team-mate Edel O’Reilly in the Final (4,4,8). O’Reilly had a scare in the Semi-Final against Katie McGlone, who took the first two sets to set up a potential shock. O’Reilly is known for her gritty determination and claimed a vital 3rd set 14-12, before closing out the match in sets 4 and 5 to claim her spot in the Final. Elayna McGlone produced some fireworks to progress to finish 6th in the event, with a spectacular win over Emma Ludlow.

There was a little more pressure on Elayna McGlone in the Under 14 event, where she was 2nd seed. She did not disappoint and progressed to the Final, with good wins over Sarah Cooney and Chloe O’Halloran. In the Final, she faced Hannah Lynch Dawson, the top seed. Lynch-Dawson was in fine form having defeated Valentine Puotkalis and Rebecca Finn, and she justified her seeding in a tumultuous battle with McGlone, recovering from a 2-1 deficit to eventually claim the match in the last set (11-9).

In the Under 12 Girls, a shock was on the cards as Kate Whelan belied her No.10 seeding to claim the title, producing the best table tennis of her career to date. She claimed victory in the semi-final in straight sets, before repeating the trick in the Final against Rebecca Finn. With this result, Whelan has confirmed her arrival on the National scene and will be a player to watch this season.

The Under 10 event is a fun event to introduce players to competitive table tennis – well done to all who took part and in particular to Ciara O’Toole who claimed the Winner’s trophy.

In the Under 17 Boys, top seed Declan O’Brien knew he would have a tough battle on his hands to claim his first trophy of the season. This arrived in the shape of Shi Zhao Li who pushed him all the way in the Semi-Final, with O’Brien happy to claim a narrow final set victory. He faced Ryan Farrell in the Final and was clinical in his victory, dropping just the 1st set.

In the Under 14 Boys, again the event went to top seed Kevin Hutchinson, who produced some great table tennis to dominate the event. His opponent in the Final was surprise package Alan Walsh, who will be delighted with his win over Jonathan Porter in the Semi-Final, despite the concession of the Final in straight sets – a great start to the season for Walsh.

The Boys Under 12 section was very difficult to predict in advance and so it proved on the day with Alexander Gillen claiming the title despite being seeded outside the top 10. He was impressive in defeating both Brian Dunleavy and Martin Williams to progress to a Final against Evin McGovern. Again, he rose to the occasion with a 3-1 victory to claim the title.

The Under 10 event is a fun event to introduce players to competitive table tennis – well done to all who took part and in particular to Paul Cooney who claimed the Winner’s trophy.

Many thanks to all who volunteered over the weekend – to our top table personnel, to our hall set-up crew and to the volunteers who worked very hard on the draw and introducing new technology to our events. Finally, thanks to all of the players who took part – we look forward to seeing you all again at the Ulster Junior Open. 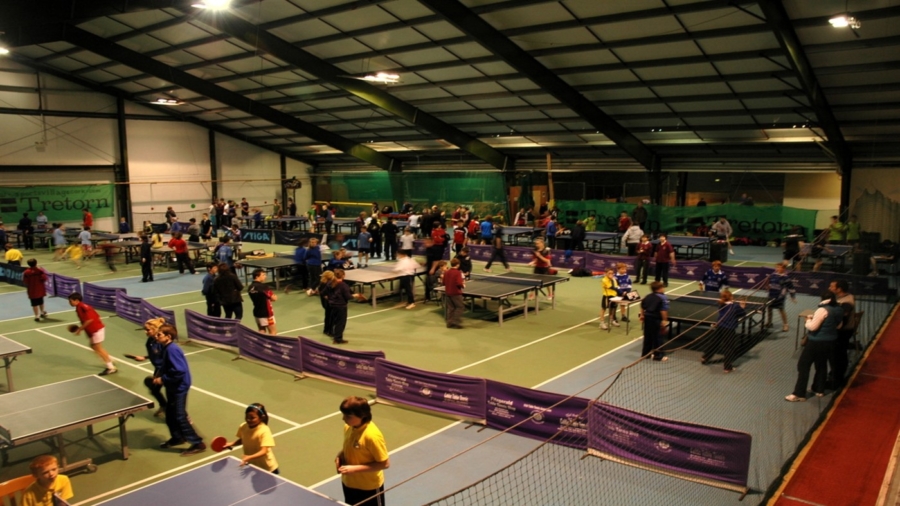 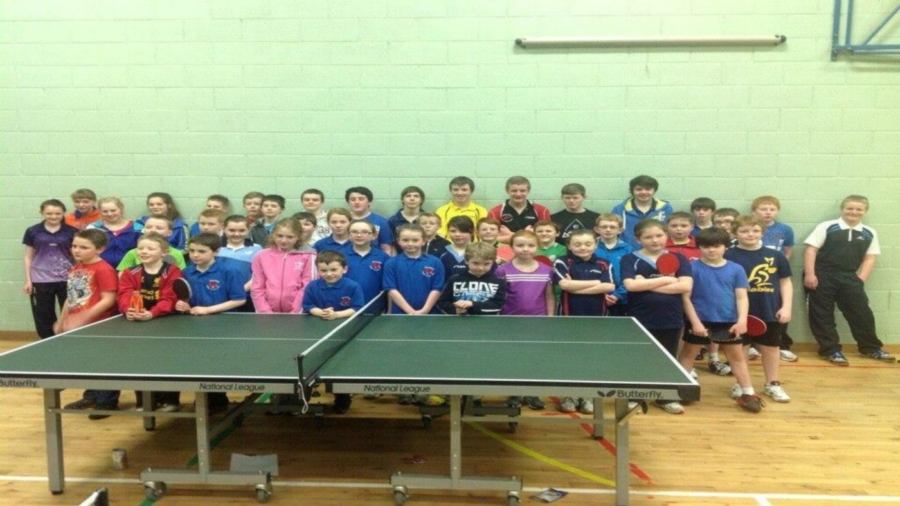 St. Joseph’s Hall, Ballyjamesduff was the venue on Saturday for the STIGA Cavan Challenger.  A total of 41 players took part and a great day was had by all.  Players from Castlerahan, Cootehill, Islandmagee, Fivemiletown, Drung, Ballymoney, Drum and a few players from no club all took part.  There were some nail-biting matches in each division and everyone managed to enjoy their games.  Thanks to STIGA sixteen of the participants went home with very nice prizes indeed!!!  The first places in each division were as follows: Division 1: Kris Foster (Fivemiletown), Division 2: Dylan Murdock (Castlerahan), Division 3: Joshua Murdock (Castlerahan), Division 4: Cian McCabe (Castlerahan). Congratulations to all who took part and the volunteers who gave up their time to assist in the organisation of the day.  Thanks also to all those who contributed beautiful cakes, sandwiches and biscuits!!! 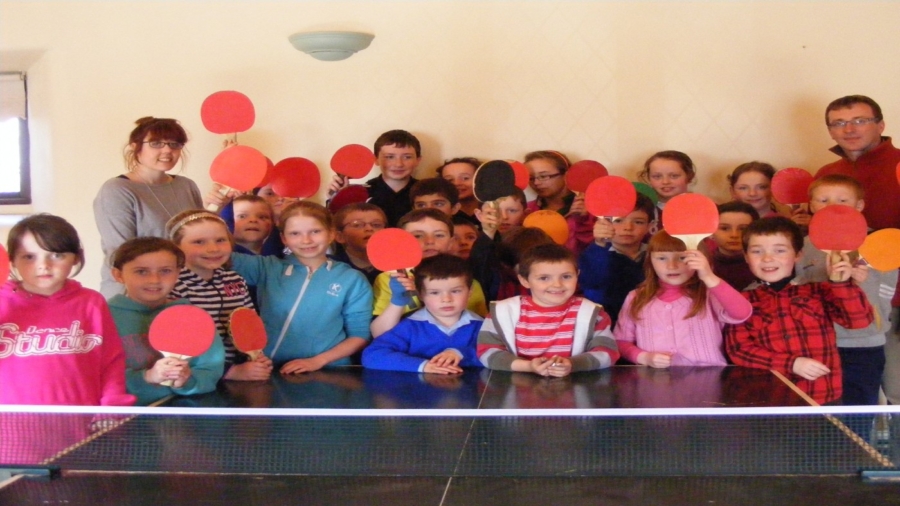 Pictured from left to right are: Donie Mullally, Shane Hurley, Evin McGovern and Alex McGovern – Thanks to Jacqui Mullally for providing the details. 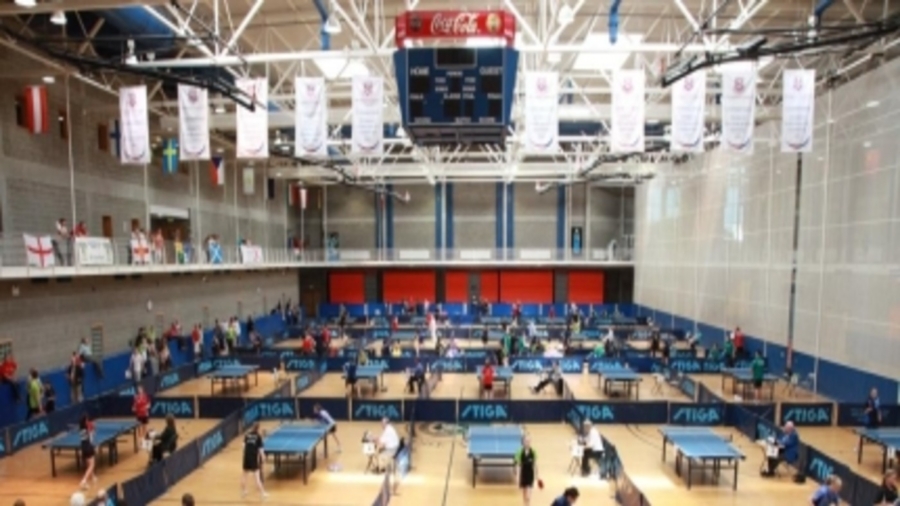 Congratulations to Dunshaughlin TTC Under 13 Girls who won a thrilling Meath Community Games Final against Boardsmill last weekend. In a nailbiting encounter hosted by Clonard TTC, the Dunshaughlin girls qualified for the next stage of Community Games competition in a match that went to the 5th set of the deciding doubles game. Table tennis is one of the many events run by Community Games Ireland and has been a frequent entry point for new players into the game. We would encourage our younger members to get involved in this wonderful competition.

Connacht hosted the latest round of the Stiga Challenger Series, on Sunday 30th January 2011. Breaffy House Hotel Resort hosted the event, which saw 71 players from Mayo, Galway, Sligo, and Westmeath taking part.
In what was a fun atmosphere, with many players playing in their first big event, a fantastic day of table tennis was enjoyed by all. With the youngest player being 7years old and the oldest 17years, there was a good mixture of ages across the groups and also a large number of girls playing in the event. Every player got to play 12 matches throughout the day. Play started at 10.00am and finished at 6.15pm.

The morning session consisted of two rounds of group matches with four and five players per group -17 groups in total per round.  The afternoon session saw the players divided into 11 groups of 6 and 7 players per group, with everyone playing each other. Boy and girls played each other in every stage of the event and in some cases the girls outshone the boys.

Connacht would like to thank the Women in Sport and Participation Programme for supporting them in making this event possible as through the funding more players are playing table tennis, and overall table tennis is the winner.

Despite the sub-zero weather conditions and very icy roads, 43 young players turned up to play in the first Munster Stiga Junior Challenger Event, hosted by Tralee Table Tennis Club. There was a large local contingent and players also travelled from clubs in Killarney and Kinneigh.

After registration at 9 AM, play got under way bang on time at 10 AM. A total of 168 matches were played on twelve tables over the next few hours.

Players were initially divided into groups of four who played each other in a Round Robin format to help decide which divisions to allocate players for the main event.

There were four divisions, with twelve players in each of the top three. Each division was split into two with the six players again competing in a Round Robin format. The seven players in Division Four played each other and the winner and runner up contested the Division Four final.

The finals were contested between the winners of the sub-divisions, Winner of 1A vs. Winner of 1B. etc. In the First Division Final, local favourite Andrew O’Callaghan put up a very good show against Killarney’s Michael Lagan, losing by a 3-1 margin.

This was a great chance for junior players to gain experience in a tournament, and every player got at least eight matches. All matches until the finals were played best-of-three.

Prizes for the top four in each division were sponsored by STIGA and supplied by TommyFitzgerald Table Tennis.

Sunday the 12th of September saw the first of the new seasons Stiga Junior Challenger competitions take place in Dunshaughlin. Hosted by the Tara Table Tennis club and with players from as far as Mayo in attendance the event was another success in the Stiga Junior Challenger series. Dara Egan of Kilkelly prevailed in division 1 with some fine wins along the way in particular over Conor Dolan of Tara.

Brian Dunleavey of Kilkelly also performed very well, eventually finishing in 2nd place. Division 2 was the closest fought of all divisions with young Eddie Ditchburn of Kilkelly taking the glory after a very close match with Andrew Kiley of Club Donic (Lucan).

Division 3 was won by the home grown talent of Emily Crawley with Tara Molloy of Kilkelly coming in second place. Johnathan Daly of ALSAA came in 3rd place, this was an excellent performance for the young man who was playing in his 1st competition.

Division 4 was where some of the newer table tennis recruits had a go and this division was won by Niamh Molloy of Kilkelly with Evan Lassov of Club Donic taking the silver position.

Players and parents alike had a great day and are already looking forward to the next Stiga Junior Challenger event on 24th October in Lucan.

At the start of the school Easter holidays and with Spring in the air, players from all over Leinster gathered at Club Donic HQ in Lucan for Event 4 of the STIGA Junior Challenger Series. With 60 players playing on 12 tables, all were guaranteed a minimum of 10 matches in this event where fun and participation is the key. Beginner and Intermediate players, many of whom were experiencing tournament play for the first time had an action packed day – with players from all over Dublin playing against players from the Midlands and Wexford.   Following initial groups of 4, the players were split into 4 ability divisions of 16, which were then played out over round robin and into knock-out stages. Players in Ability Group 4 played as many as 14 matches over the course of the day under the watchful eye of Club Donic coaches and ITTA volunteers – this will have been of great benefit to these developing players.

Congratulations to all who took part and as always to those who travelled to play in the Challenger Series – all players receive National ranking points and will hopefully continue their way along the player development pathway in the April Challenger event – again to be hosted by Club Donic.

The ITTA and Club Donic would like to remind you that STIGA Challenger Series 5 is scheduled for 25th April in Colaiste Padraig, Lucan. Club Donic Coach Tommy Fitzgerald was delighted with the event and recorded his thanks to Brian Murtagh,Principal of Colaiste Phadraig, all of the coaches and players who took part and in particular thanks to Liam O’Ceallaigh, Anna Kelly, Tony Farrell and Phyllis Kenny who all contributed their time to ensure the players had a great day.